A 2014 Pew Religious Landscape survey reports that only 3.1% of the US population are atheists.  Agnostics came in at 4%. Most people believe God exists. Why? Is it reasonable to believe God exists? Yes. Allow me to lay out a logical argument for God’s existence. I jotted down the premises to this argument back in the late 1990s as I listened to Norman Geisler, the renowned Christian philosopher, debate an atheist on a university campus. I found the logic to be quite compelling. And it seemed to me that the university students did as well. Here’s the argument. The comments on the premises are mine.

This is undeniably true. Anyone who would deny the truth of this first premise would have to exist in order to deny it.

2. Nothing does not produce something.

One of the oldest laws of science is Ex nihilo nihil fit (“Out of nothing, nothing comes”). It seems patently obvious to most of us that nothing cannot do something. Nothing cannot see, smell, act, think, let alone create something. Nothing is literally “no thing.” No thing does not have the power to do anything. Even David Hume, one of the most zealous skeptics of Christianity ever, agreed to the truth of this second premise. He said, “I never asserted so absurd a proposition as that anything might arise without a cause.” (Source)

So, if the first two premises are true (something exists, and nothing does not produce something), then a rather astounding conclusion logically follows…

3. Something or someone must have always existed.

Why? To have brought into existence the “something” that exists now (in premise one). Nothing does not produce something.

Skeptic: “Couldn’t there have been a time billions of years ago when there was just nothing?”

So, we’ve safely arrived at point three: Something or someone must have always existed.

4. The universe has not always existed.

Numerous evidences from the field of astronomy have led cosmologists to conclude that the universe began to exist. Two of the evidences are…

A. The motion of the galaxies

Prior to the 1920s, scientists had assumed that the universe as a whole was static (stationary). But in 1929 an astonishing thing happened. An American astronomer named Edwin Hubble discovered that the light from distant galaxies appeared to be redder than it should. The startling conclusion to which Hubble was led was that the light is redder because the universe is growing apart; it is expanding!

When the source of incoming light is moving away from an object the light that you see is shifted toward the red end of the spectrum. The light of the galaxies was redder because they are moving away from us. But here is the interesting part: Hubble not only showed that the universe is expanding, but that it is expanding in all directions. Scientists have concluded that the galaxies in the universe are not stationary but are expanding further and further away from each other from what appears to be some stationary point.

Imagine that I was to draw a bunch of dots on a balloon that represented galaxies and then blow up the balloon. If you were to suck the air back out, or let’s say rewind the film, go back in time—what would happen? The dots would converge, i.e., get closer to one another. The same is true with our universe. If you go back in time scientists say that the stars would converge into a singular space, where they exploded into being.

This explosion or beginning of the universe is often referred to as “the Big Bang.” Christians and Jews call it Genesis 1:1 (“In the beginning, God created the heavens and the earth”).

B. The Second Law of Thermodynamics

The Second Law of Thermodynamics is one of the best, most established laws in all of science. In fact, there is no recorded experiment in the history of science that contradicts it. It states that the amount of useable energy in any closed system (which the universe is) is decreasing. In other words, the useable energy in the universe is dying out like the batteries in a flashlight.

Scientists acknowledge that the sun cannot burn forever, and that even our galaxy itself will one day, if left to itself, burn up and die out. So, we reason that if the Second Law of Thermodynamics is true for all closed systems, then it is true for the universe as a whole. The universe according to the atheist is a gigantic closed system, since to them it is all there is and there is nothing outside it. This means that the universe is currently running out of useable energy.

If it is running out of useable energy, then it cannot be eternal, for a finite amount of energy (no matter how large the quantity) could never have brought the universe through an eternity of time.

Imagine stumbling upon a lit flashlight. Curious about how long it has been on, you do a little investigation. Through your investigation, you discover that the batteries are going downhill. They are running out of energy. You turn to a scientist standing nearby and ask him: “How long do you think the flashlight’s been burning?” What if he was to tell you, “It’s always been on. It’s been lit like this and burning like this forever.” Would you believe that? Of course not. There’s a problem with that isn’t there?

Batteries with a finite amount of energy (seen in the fact that they are steadily running out of energy) could never have kept the light burning for an eternal amount of time. It would have run out of batteries trillions of years ago! So it is with the universe. The amount of useable energy is steadily decreasing, thus proving it impossible that it has been burning for all eternity.

So, the motion of the galaxies, the Second Law of Thermodynamics, and other discoveries like the background radiation echo discovered by Penzias and Wilson, have led astronomers to conclude that the universe has not always existed.

Now, if these premises are all true:

…then a conclusion can be validly drawn:

Do you think this is a sound argument thus far? I believe it is! The whole argument could come crashing down, if even just one of the premises could be proven to be false. (Causing the argument to crash wouldn’t prove that God doesn’t exist, it would just prove that the argument is not valid.) But let’s take it a bit further.

6. Intelligent life exists in the universe.

This seems self-evident. Anyone who would disagree and say, “There is not intelligent life in the universe,” would prove there is intelligent life in the universe—at least enough intelligence to piece together those eight words. To understand any of this article (even if you disagree with some of it) would also prove that this sixth premise is true, for it has taken a great degree of intelligence to understand the hundreds of combinations of syllables I have used. So this premise is undeniably true as well.

How could a material, inanimate, unintelligent, unconscious force produce an intelligent, living, breathing being? It takes a living, intelligent being to create a living, intelligent being. Non-life does not produce life. You could leave the barren side of a mountain exposed to wind, rain, the forces of nature, chance and millions of years of time and you would never get a Mount Rushmore, let alone a living, breathing human being with 206 bones, 640 muscles, and hearts that beat over 100,000 times a day.

8. Therefore there must be an intelligent, living, eternal power, beyond the universe, that created the universe.

How might a Christian share the points above in a short conversation with a skeptic? I turn the premises into questions.

Skeptic: “There are no good reasons to believe in God!”

Christian: “Well, can I ask you a few questions?”

Christian: “Can we agree that something exists?” [Premise 1]

Christian: “Can we agree that nothing does not produce something?” [Premise 2]

Skeptic: “Let me think about that.”

Christian: “It’s not a trick question. Nothing can’t do anything, right? What is nothing? No thing. No thing can’t eat, breathe, think, move, let alone create something. Nothing is nothing.”

Skeptic: “That makes sense. I agree with that.”

Christian:  “Well, if something exists [1], and nothing does not produce something [2], then can we agree that something must have always existed?” [Premise 3]

Christian: “Something must have always existed to have brought into being the things that exist, for as you just agreed: Nothing cannot produce something.”

Skeptic: “Interesting! No one’s ever explained it to me that way.”

Christian: “There are lots of good reasons to believe in God. Would you be open to reading more about evidence for God? I also encourage you to read the Bible. It tells us that the God who made the universe, who made you and me, came to the earth in the person of Jesus Christ to reveal Himself to mankind and then die on a cross for our sins. He rose from the grave three days later and now offers to you and any who would place their faith in Him (John 3:16), the free gift of everlasting life (Romans 6:23). You can experience God’s forgiveness for your sins right now. 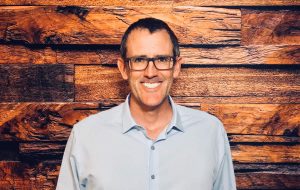 Charlie frequently speaks—free of charge—at churches, conferences, retreats, etc. If you are a pastor and would like to inquire about him speaking at your church or event, please contact ABR here and let us know the date(s) you'd be interested in, and someone will email you back shortly.